JIS of the Week: One World Trade Center Treason

Let it not be said that Stewart doesn’t have it coming.

A video documentary was recently aired titled, REBUILDING THE WORLD TRADE CENTER. The official name of the new structure is the One World Trade Center, which was built in place of the old Twin Towers that were demolished from bombs in the buildings on September 11, 2001. In case you don’t know, 911 was irrefutably an INSIDE JOB!!!

Yes, it was irrefutably an inside job. The benefits were immediately evident. Orchestrate the grisly deaths of thousands in a traumatic national tragedy, all in order to WASTE TONS OF MONEY ON IRAQ!! It makes perfect sense!!

In the documentary, it is admitted by the building’s architect that the skyscraper was patterned after the Masonic Washington Monument in Washington D.C.! Admittedly, the skyscraper is an obelisk, which is symbolic of an erect male sex organ (revered by the Freemasons).

Also, the image of a bunch of Freemasons stroking an obelisk is amusing. I suppose if we see a flock of old men in robes attempting to surreptitiously rub themselves on the base of the building while no one’s looking, we’ll have some cause for alarm.

You couldn’t make this stuff up! Literally, the rebuilt Trade Center tower is a giant penis mocking every U.S. citizen… screw you America! The New World Order gang are treasonous criminals who are above any laws of man in this world. They are untouchable. The reason why is because they control the Supreme Court, the newsmedia and the highest positions of every office in government.

If the One World Trade Center is LITERALLY a giant penis, you must have one strange penis, Stewart. Although that’s to be expected when you have a stick up your ass so enormous that the constipation comes out the other side. I bet the New World Order has the secret cure for that.

All that Freemasons need to control any office of government is to control the top office, because everyone underneath is subject to their authority and rule of law. That’s how they pulled off the 911 attacks! This is the “spiritual wickedness” in high places that the Bible identifies as our true enemy. Every high-powered leader in America is a member of some occult secret society. It’s no coincidence that Senator John Kerry (Mr. Skull & Bones) is on the front lines of the assault against Syria. I don’t believe for one second that President Bashar al-Assad of Syria used chemical weapons on his own citizens. Al Qaeda is synonymous with the the Central Intelligence Agency (CIA) in America. It was the CIA who started Homeland Security after the 911 attacks. The CIA’s agenda is to overthrow the American republic for the sake of achieving a World Government.

How does bombing Syria play into overthrowing the American republic? And so what now, you like Assad? Don’t doubt him at all?

And do tell, Stewart. Where are the vast stacks of research supporting the assertion that Al Qaeda and the CIA were in it together for an absurdly expensive ruse of high casualties and unclear goals?

Few students of history ever learn the truth that America was founded by freemasons as a vehicle by which to achieve world government. Our first U.S. President was George Washington, a devout Freemason. It was all laid out in 1775 by Adam Weishaupt in his secret society called, what else, “The Illuminati.” The newly constructed One World Trade Center at ground zero in New York City is exactly 1776 feet tall, deliberately build to that height in honor of the year in which the U.S. Declaration Of Independence was signed, 1776.

The building is saturated with occult symbols and has the markings of the Godless New World Order all over it. It was bad enough that after 911, ground zero featured a 911 memorial with the All Seeing Eye of Horus. Adjacent subway walls had ceramic tiles removed and replaced with All Seeing Eye designs (see photos to right and below). Creepy! Truth is stranger than fiction.

Human beings were made with eyeballs, therefore God is a Freemason 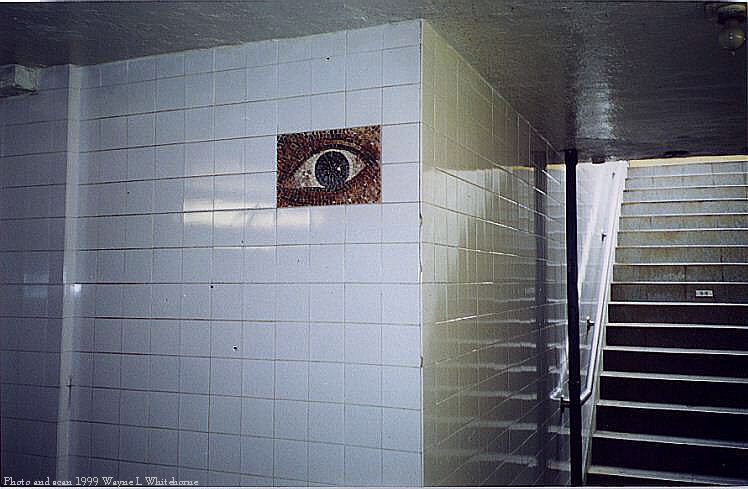 Hey, I didn’t know ordinary people were all Horus!!

In the recent photo displayed at the beginning of this article, you can clearly see The Great Pyramid displayed by the outer surface of the newly constructed One World Trade Center building. This is the Illuminati’s way of claiming victory over their prey—in this case, the American people!!! The tallest building in America is a giant 1776 foot tall penis!!! I’m not dirty minded, I’m telling the truth!!! The building’s architect said it, saying that the building was designed to emulate the Washington Monument. Nebuchadnezzar’s image was a 90 x 9 foot obelisk, also a male phallus. This occult image has its origins in pagan ancient Egypt, which you can easily research in numerous online articles.

The wheel had its origins in a non-Christian time and place. Let’s destroy all wheels. I’m sure Satan modeled some naughty bit or other on the wheel. I don’t understand female anatomy very well, but it must be some shameful organ or other down there. I think I heard some disgusting, Satan-infested teenage girl driving down the road the other day say on her Satan phone: “Yeah mom, I’m giving the old thing a spin right now.” Clearly she was referring to her vagina wheel! What a wretched world we live in. Praise Jesus for granting the world his holy vagina plugs.

The 911 attacks were not done by Muslims. Bin Laden was a face to blame and hate. I remember seeing Saddam Hussein stickers in the urinals at work. The Bush administration lied, lied and lied. They first blamed Saddam for 9/11, but then later said it was Bin Laden and Al Qaeda hiding in Afghanistan. The U.S. military led a coalition of UN troops to invade Iraq and Afghanistan, overthrowing both governments. Today, the Illuminati have appointment puppet governments under the pretense of Democracy into both nation’s governments. Both Iraq and Afghanistan have lost all their sovereignty. When Syria is stripped of their most powerful weapons, Iran will likely be overthrown also. How The Illuminati Is Reordering The Middle East (Iraq, Syria, Lebanon, Libya, Somalia, Sudan & Iran).

Man, those puppet governments of the Illuminati should really get around to doing stuff that might advance a One World Government. I don’t think “continued petty graft and sectarian strife” are markers of progress on that front. Also LOLLL at Stewart apparently wanting Syria to keep its chemical weapons!! Many tears were shed that day, when a brainless dictator lost his horrendous agents of plague. They posed such a threat to America’s dark ambitions somehow!

I was sickened the other day hearing Bill O’Reilly lie about Syria. FOX NEWS is totally bought, owned and controlled by the New World Order gang. FOX is controlled opposition, masters of deception and forming public opinion. To avoid looking biased, they present opposing views. But then they bring in so-called “experts,” movie stars and famous singers and other respected and admired people by the public, who push the agendas of the New World Order. FOX NEWS does this all the time. They are professionally trained liars, deceivers and cons. Bill O’Reilly this week was comparing Syria’s president with Adolf Hitler. He said that 80% of Americans didn’t think that the U.S. should stop Hitler either. That’s how O’Reilly works, propagating blatant lies as assumed truth. It’s sickening. No evidence has been brought forth to prove that Syria used weaponized gas against its own citizens. FOX NEWS talks about how Syria killed little children. Idiotic Americans buy into that crap, irresponsible media and criminal false allegations. Syria is not the enemy.

Dude. Chemical weapons are not the only strike against Assad, lol. Yes, they’re the main point of contention when it comes to intervening due to international law, but there’s no arguing Assad isn’t terribly ruffled by his own people’s mass death at the hands of his security forces. If the quashing of all dissent weren’t bad enough, how about having people killed in their hospital beds? Or is every IV bag slashed another notch for Jesus’ counterattack against the Illuminati and I’m missing the grand significance of Assad’s angelic mission?

I heard President Obama in his speech to the nation demonize Syria’s president, just like FOX NEWS wrongfully does. Mr.. Obama is reading off a teleprompter that his professional speech writer wrote. Democrats and Republicans use the same speech writers. It’s all deceptions and lies. Whatever it takes to dupe the moronic American public. History has proven that 95% of the masses of the population are easily instigated, deceived and manipulated to do whatever the ruling class want them to do. U.S. presidents are puppets, no more. They don’t have the almighty power that television, movies and the newsmedia pretend them to possess. The President is a face to blame. So no matter how much evil, treason and crimes are committed by any particular President, all of the stigma and blame leaves office with him. And then he retires in extravagant leisure and bliss for the rest of his wicked life until he dies and goes to hell forever (Psalms 9:17).

You’re so much smarter than 95% of the public, Stewart. In fact you made all these conclusions yourself! You didn’t just swallow what other conspiracy theorists said wholesale and indiscriminately, no sirree!!

The True Powers Behind Washington D.C. Are Evil And Secret

The woeful scam is that the true Masonic, Bohemian Grove and Skull & Bones criminals powers controlling our nation remain in place, their names are deliberately kept out of the news and they are free to continue hurting, afflicting and robbing the American public. Each U.S. President leaves office with the blame. As of August 2013 President Obama has a 9% approval rating. The man is evil, rotten and cold-blooded, a total fraud, completely sold out to Satan. The public’s anger and hatred is appeased with the election of a new and allegedly better President each election who will make the flowers grow, rainbows for everyone and peace on earth forevermore. Yet the thieving, killing, lying, perversion, treason, evil and warmongering continue.

Stewart has a very low opinion of the human beings his God created. And this is God’s Human Being 3.0, after Adam and the flood. Seriously, what’s taking that Second Coming so damn long

And that’s all I can stomach this week. See you next time